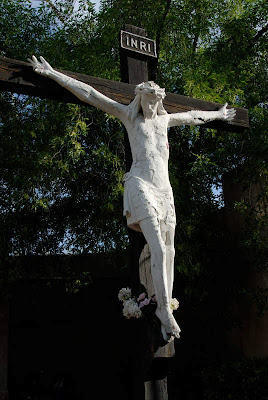 I last visited this special little place (very small!) in 2007. It's an isolated spot just west of I-10. Though a sign at the entrance says this place is under renovation, it's open... and as peaceful as ever.

The City of Tucson lists this as a Tucson Special Place. I like the description on the VisitTucson.org website, from the Tucson Convention and Visitors Bureau:


“In return for prayers answered during World War I, Tucsonan Felix Lucero began work on sculptures depicting biblical scenes. The result: this lovely park at 602 W. Congress St. on the west bank of the Santa Cruz River. Now it's city-maintained and open from dawn to dusk. You'll find shade trees and, across Congress St., Tucson's official largest eucalyptus tree.” 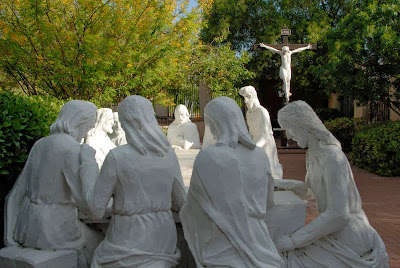 Location: Just west of I-10 and the Santa Cruz River on the north side of Congress. (Note: both Google Maps and Bing Maps currently have the wrong location. Mapquest gets it right.)

Hours: Around 8 AM to dusk. (A City worker comes to unlock and lock the gate.)

Update (April 29, 2015): Good news and bad news. The good is that I found a City of Tucson video published on March 4, 2014 titled Gethsemane Statuary Restored. The sickening news, less than a year later, is the City press release The Garden of Gethsemane Closed Due to Vandalism.