Benches, some shade, and a streetlight 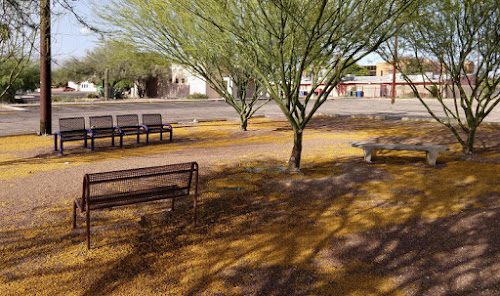 This parklet is about as basic as they come: three benches surrounded by five fairly young palo verde trees with a lone streetlight overhead. I read that it was created after buildings were torn down for the Broadway Blvd. widening that's starting just south of here. The small parking lot just north of the parklet serves the small business on the other side of the lot, but I can't imagine that the owner would mind a car or two.

The most appealing time to come is probably first thing in the morning or toward evening — when there's not much noise from Broadway and the streetlight can give a little security. (It doesn't feel like a dangerous spot to me, and you're a little bit off of Broadway.)

Location: Northwest of the corner of Broadway & Tucson, just east of where Smith and Norton Avenues split

Hours: Probably anytime; the streetlight could make it nice on a warm summer evening